Liverpool goalkeeper Simon Mignolet is on the front page of Portuguese newspaper A Bola today, as he’s reportedly become a target for Benfica.

The outlet says that after the Eagles missed out on signing Mattia Perin, they now have Mignolet and Roma’s Robin Olsen on a shortlist.

Regarding the Liverpool player, Benfica believe they can land him since they would offer him much more playing time than he’s been having in England.

There are also another couple of factors which mean a deal could be found. First, it’s mentioned that Mignolet is 30, and since he’s been on the bench at Anfield, he wouldn’t be so expensive. 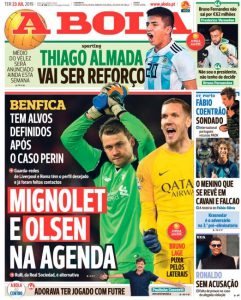 Then A Bola recalls there’s a good relationship between Benfica and Liverpool, especially from the time when the Eagles’ B team gave a favour to Jurgen Klopp by emulating Tottenham formations during the Reds’ preparations for the Champions League final.

Olsen lives a different situation, since he’s been starting games at Roma and has more clubs trying to sign him. So it looks like Mignolet would be a more realistic target for the Eagles.