Home Championship QPR player ‘changed his mind’ on summer transfer after after being influenced...
SHARE

Reports coming from Belgium in July explained the Jupiler Pro League side and QPR had reached an agreement. The former had to agree terms with the 22-year-old to complete a transfer.

On July 28th, the player travelled to Belgium and the trip was made to see if an agreement could be reached with Club Brugge.

Friday’s edition of Het Belang van Limburg explains the QPR player ‘changed his mind’ on joining Club Brugge after coming under the ‘influence of his entourage’.

It’s claimed the track leading to Osayi-Samuel’s signing is ‘not officially buried’ at Club Brugge, but is ‘currently closed’.

Brugge manager Philippe Clement is ‘not concerned’ about the lack of signings and stressed the club’s leaders are working on bringing in reinforcements.

“As a coach I have to deal with the present [situation]. I know the board is working on it, I know what the plans are. We discussed them together and I have no doubt that the people within the club are working hard on that [signings],” Clement said. 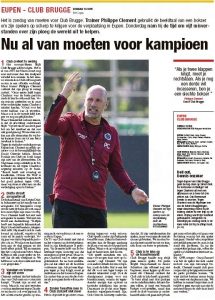 “Because many leagues are not aligned with ours, that’s sometimes a problem. And now that those competitions are over, those players or club leaders want to go on holiday first.”