Following Benfica’s UEFA Youth League title this week, the Portuguese media has been full of stories about the Eagles’ new generation, who could still provide big things for their first team.

On Friday, newspaper A Bola features a big piece about Diego Moreira, pointing out that the Belgian national team are now moving to have him before he chooses to play for Portugal.

And when speaking of the winger’s past, the outlet writes that Liverpool tried to sign him before he landed at Benfica.

Moreira joined the Eagles in the summer of 2020, and according to A Bola, one day before the contract was signed, he had an ‘invite’ to move to the Reds. 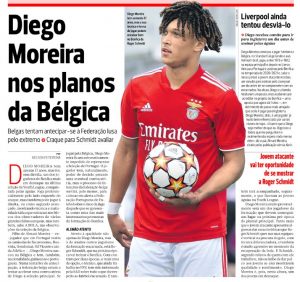 A Bola writes that Moreira’s family ‘hesitated’ a little, and despite the ‘bold step’ that a move to Liverpool would be, they ended up believing in Benfica’s project.

It’s probably too early to say that Liverpool regret not landing the 17-year-old, but he’s undoubtedly showing good potential for Benfica already.

His campaign in the UEFA Youth League included four goals and five assists in ten appearances, and according to recent reports, Manchester City are already interested in his signing, having already made the first moves to land him.