If the last couple of days are anything to go by, then Manchester United have firmly planted themselves right in the middle of the race to sign Victor Osimhen.

It’s been said that an offer of over €100m has already been brought to Napoli from the Red Devils for the Nigeria international, who appears to now be the favourite to bolster the attack at Old Trafford.

Corriere dello Sport have a long article on the matter on Friday about it all, making one thing very clear: the Naples side ‘does not want to give discounts’.

They point out a meeting did take place between Cristiano Giuntoli and the player’s Italian agent, Roberto Calenda, where it was made clear that ‘Manchester United have decided to move, to place themselves ahead of everyone’.

That being said, as explained above, regardless of the fact ‘the charm of the Red Devils is irresistible for the Devil Osi, all fire, flames and racing at a thousand per hour, Napoli have no intention of giving discounts’.

The starting price will be high, and ‘the priority is to reduce the assets between the fixed base and the bonuses too much: never below €100m’. 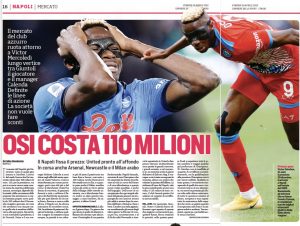 While other Premier League clubs, like Arsenal or Newcastle are also in the mix, it’s stated the Old Trafford side ‘have another small advantage: in the Osimhen household, as kids, they cheered for Manchester United’.

Right now, ‘it is above all’ the Red Devils that are making the headlines and the hype, because ‘the great contacts have started from Manchester, and when the definitive approval of Erik ten Hag’ arrives, ‘all that remains is to evaluate the scope of the offer’.

In short, ‘the basic request of Napoli is €110m’, which means ‘the club will let Osi leave only in the presence of an indispensable offer’.

Manchester United know what to do, and they just need to convince Ten Hag.