On Tuesday Sky Sports reported: ‘Porto defender Bruno Martins Indi is due to have a medical at Stoke on Wednesday after the clubs agreed a deal, according to Sky sources.’

It was curious news to the Portuguese media who reported that things weren’t so far along, Martins Indi wasn’t at Stoke City, and was actually with Porto for a friendly on Wednesday evening.

O Jogo, a Portuguese newspaper, reported on Thursday that there was no agreement between Porto and Stoke for the transfer of Martins Indi, and whilst one remained possible, it was also possible he wouldn’t return to Mark Hughes’ side.

Their previous claim about Stoke wasn’t mentioned, and these latest claims have been disputed in Portugal. If Crystal Palace had agreed a fee, Martins Indi would have travelled 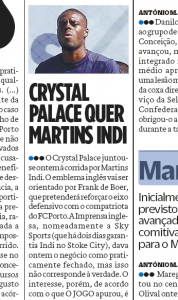 yesterday, but O Jogo clearly don’t think he did.

O Jogo say the claim a Crystal Palace deal is all wrapped up ‘does not correspond to the truth’, but they do add that the interest ‘is real and the matter may advance in the coming days’.

And that’s where things stand.

Stoke City’s hopes aren’t over yet, but Crystal Palace, whilst not having a deal agreed, seem to be edging ahead.