Portuguese newspaper A Bola has today a full page story about Rafael Camacho, explaining how good he’s been, as he’s finally found a place in Sporting’s starting team.

They say the player is rated highly by club president Frederico Varandas, who isn’t planning to sell him, despite interest from German and French clubs.

And once again, the report mentions the great relationship that Camacho still has with Liverpool manager Jurgen Klopp.

It’s said the Reds continue to ‘attentively’ follow the winger, since Klopp hasn’t forgotten about him, as the two of them speak ‘very regularly’ on the phone. 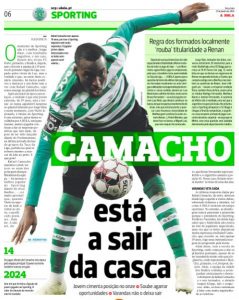 The Portuguese press has previously claimed that their relationship has nothing to do with Camacho’s possible return to Anfield. Still, his friendship with Klopp is always mentioned in a paragraph where they’re talking about the player’s future.

Camacho left Liverpool for Sporting in a €5m deal last summer. He was supposed to make the move in January 2019, but it was Jurgen Klopp who kept him with the promise he would have more chances, something the manager wasn’t able to fulfil.