Thiago’s future is away from Bayern Munich and Liverpool have been regularly discussed as the midfielder’s next potential destination.

On July 17th, Bild reported that Jürgen Klopp has internally asked the Reds to sign the 29-year-old.

Munich based newspaper Abendzeitung once again reiterates the former Barcelona man’s desire to look for a new challenge this summer.

The Merseyside club get a mention and the report adds the Spain international ‘sees his future’ at Anfield.

Luckily for the player, he has the endorsement of the former Borussia Dortmund manager. It’s claimed that Klopp considers the Bayern star to be the ‘missing piece of the puzzle’ at the club.

With a year left on his contract at the Allianz Areana, Thiago ‘would very much like to switch to Liverpool’, and Klopp also likes the idea of the player being at his disposal.

The two clubs are far away from reaching an agreement because Bayern are demanding €35m, but Liverpool ‘want to pay’ around €25m. According to Abendzeitung, a ‘compromise can be found’. 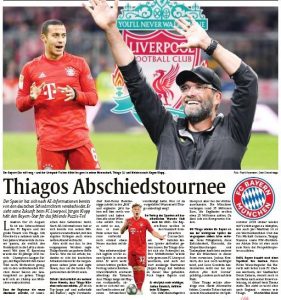 Thiago has said goodbye to his teammates and the Bavarian club, and spent an evening with some of the players he’s been close to.

Bayern are one of the favourites to win the Champions League this season and Thiago remains hopeful of ending his time at the club as a European champion.