Home Europe Player could give answer to Man City exit in the ‘next 48...
SHARE

Back on January 15th, we covered a story about Manchester City’s Ian Poveda and his potential transfer to Torino in Italy.

Leeds United were also reportedly interested at the time, but they appear to have disappeared off the radar since, leaving the Serie A club with a free run for the youngster.

The forward was said to be mulling over their offer and was expected to give his answer by the end of last week, but he’s decided to take a little longer, if Gazzetta dello Sport are to be believed.

In the meantime, it’s reported the Manchester City youngster has turned down a new contract offer from the Etihad and ‘could give an answer’ to Torino in the ‘next 48 hours’. 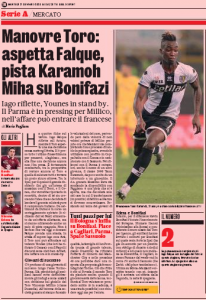 Poveda is said to ‘like the Turin world a lot’, and when he gives his answer to the Italians, it will be up to them to ‘assess whether to take him right away or whether to close today and wait for the summer’.

Either way, it seems that if the England U20 international says yes to the offer, he’ll end up in Italy one way or another.