With Sky Sports reporting Aston Villa interest in Mehdi Taremi this week, there’s of course some big coverage from Portugal about the news.

Most of the local outlets don’t seem to have a clue about the chase, as they’ve been caught by surprise when reading the claims.

The only newspaper who wants to say something seems to be Record. They make it clear that Rio Ave haven’t received any bids for the striker so far.

It’s said that the Portuguese side are aware of big interest the striker has been attracting, as there are also some German and French sides chasing him. 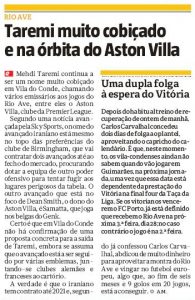 Mehdi Taremi has nine goals and five assists in 20 appearances this season, and that’s something quite hard to achieve at Rio Ave.

The striker joined the club in a free move from Al Gharafa last summer, and could turn into some quick profit for the Portuguese side.

Aston Villa interest surely has to be questioned though, for several reasons including the club’s signing of Mbwana Samatta.