If Leeds United really do want Ian Poveda from Manchester City, they better get their act together, as Tuttosport in Italy seem to think he’s edging closer and closer to Torino.

The deal isn’t done yet, but after Tuesday’s claims that an offer of €400k/year was made by the Serie A side to the 19-year-old, the Championship club have some work to do and not a lot of time in which to do it in.

Their biggest challenge will be to convince him to stay in England, as Tuttosport explain Poveda would ‘gladly join’ Torino as the Italian or Spanish leagues are more suited to his technical style of play.

The Italian newspaper continue by saying the young Englishman is ‘currently evaluating’ the €400k/year offer placed in front of him, and his answer is expected ‘by the end of the week’.

If it’s a no thank you, perhaps there might be a need to improve the offer from Torino’s end.

As for Leeds in all this, they are mentioned in Wednesday’s article, but only in passing, as Tuttosport simply remind their readers they’ve been after him for a long time, alongside Celtic in Scotland. 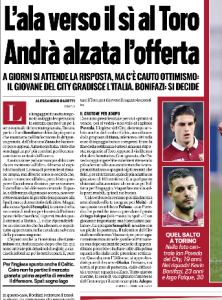 There are no new details about the interest from Marcelo Bielsa’s side, meaning the offer they supposedly made could still be on Poveda’s desk, one he will likely weigh up against Torino’s in the coming days.

In the end, it seems it could all end up coming down to where he wants to play more: Italy or England.