Reports of Leeds United interest in Ian Poveda, and even a claim of an upcoming medical, were somewhat rocked on Monday by Tuttosport.

The Italian newspaper reported Poveda was in the stands on Sunday as Torino beat Bologna 1-0. He wasn’t on a city break, and had been joined by his agents, with the Turin club interested in signing the Manchester City owned player.

Tuttosport reported Poveda was set set to remain in the city on Monday, and on Tuesday they have another article about the situation. The 19 year old is still thought to be of interest to Leeds and it’s stated the Championship have ‘made an offer’ to try and get him.

However, it’s thought Torino are pushing ahead. Club officials met the player’s father yesterday, and they want to sign him either now or wait for a free transfer in the summer.

Offers for both scenarios have been placed on the table, and the insinuation is Torino are pressuring the Poveda camp to convince City to let him leave for nothing. If that happens, he can train with the club for the rest of the season, get used to Italy, and be available for 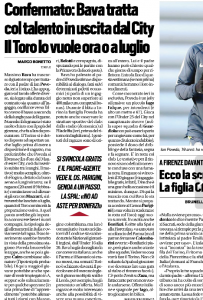 the first team squad after the summer.

The Poveda family visited Torino’s training ground, and there’s talk of a salary not exceeding €400k, after tax.

There’s a slight worry Leeds United could offer more and be a real temptation, but it’s also stated the youngster fancies a move outside of English football.