Even before the summer transfer window, and long before this current January one, Leeds United have had an interest in Noa Lang.

The young Dutch winger remains one of the stars at Club Brugge this season, with eight goals and 11 assists in all competitions so far over the course of 31 appearances.

He made it clear recently that he wasn’t planning on staying at the Belgian club for much longer, however, and De Standaard now look at his options after he made ‘his wish to leave public’.

They state he now has ‘five months to entice a top European club to make an offer’, and ‘a transfer to a top five league seems a foregone conclusion’ at this point.

The big question, however, is where? Because they explain that Lang is currently ‘keeping Leeds United in the waiting room’. 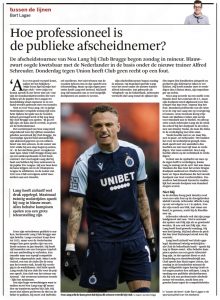 Marcelo Bielsa are said to be ‘one of the club to have stuck their nose at the window’ for the winger, but haven’t appeared to convince him yet.

That’s somewhat understandable, since the Elland Road side current sit 15th in the Premier League, recently beaten at home by a struggling Newcastle, but there is still time to turn things around.

They would undoubtedly face competition for his signing, though, as Arsenal are also said to be among the interested parties, and certainly represent a more enticing destination at the moment.