On March 3rd, we covered claims from Germany that Chelsea are included in the list of clubs who are interested in Borussia Dortmund star Jadon Sancho.

It was also explained the Bundesliga side have set a valuation of €140m for the winger.

This week’s edition of SportBild takes a look at the possible destinations available for the England international and also provides a rating of a chances of a potential transfer.

It’s suggested the 19-year-old will ‘fit well’ into Frank Lampard’s system at Stamford Bridge. The ex-Derby County boss relies on ‘fast attacks and ball possession’ and the teenager can do both very well.

SportBild expect Sancho to play on the right side of the attack in the 4-1-2-3/4-3-3 formation, if he joins the London club. 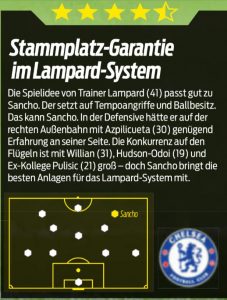 They further add the Dortmund star have a ‘guaranteed place’ in Lampard’s starting XI, despite the manager having other options.

Therefore, SportBild have given a rating of 4.5/5 for the possibility of Sancho moving to Chelsea in the summer.