Jadon Sancho has been a sensation for Borussia Dortmund this season, with 14 goals and 15 assists to his name in the league.

The 19-year-old has been heavily linked with a move to the Premier League and Liverpool are believed to be one of the contenders for him, according to reports in Germany.

Earlier this month, Bild reported the Bundesliga side value the England international at around €140m.

This week’s edition of SportBild looks at possible options available for Sancho in the summer and the Champions League winners are viewed as one of the potential clubs for him.

It’s claimed that Jürgen Klopp’s attacking football ‘fits perfectly’ to the teenager’s ‘fast game’. However, he has a lot of work to do when it comes to the Reds’ counter pressing.

Should Sancho decide to join the Merseyside club, he could feature on the right wing in a 4-3-3 formation.

However, it is unlikely that he would be assured a place in the starting lineup because Mohamed Salah and Sadio Mané are the first-choice players in wide positions. 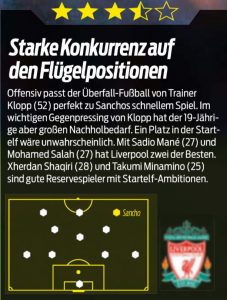 In addition to this, Klopp has the likes of Xherdan Shaqiri and Takumi Minamino as backup options for the attacking positions.

Therefore, SportBild hands in a rating of 3.5 out of 5 stars for Sancho’s possibility of joining Liverpool next season.