With less than 48 hours left in this window, AS claim almost the majority of Sevilla’s business is ‘conditioned by the sale of Koundé to Chelsea’.

The Spanish club state they will not accept any proposals from the Blues on the last day of the window.

Sevilla sporting director Monchi, who didn’t even value the €50m offer from Thomas Tuchel’s side, is ‘relatively calm’. He’s insisting if the proposal doesn’t reach €70-75m for Koundé, it will be ‘discarded’.

Monchi has informed Chelsea ‘interlocutors’ that if there’s no offer from them today, then he will refer to the player’s release clause of between €80m and €90m on deadline day.

ED add that from England, they insist the Champions League winners will make a new 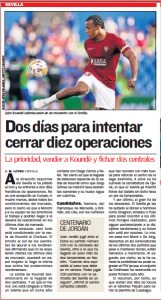 offer higher than €50m, but it won’t be meeting the €70m demand set by Sevilla.

Sevilla have identified Koundé’s replacement, but the ‘most feasible scenario’ is for him to continue at the club, even though the Frenchman has ‘agreed a succulent’ five-year contract with Chelsea.

This can change if the Blues return with an offer high enough to convince Sevilla.