It’s no surprise to see that Tuttosport has another story about Paul Pogba. But it turns out that this one is a little more interesting than the usual.

They now focus on a claim Manchester United have made an approach for Aaron Ramsey. It’s said the Red Devils have requested information eyeing a summer move.

That’s when it’s claimed that Ramsey could be the ‘key’ for Paul Pogba’s return to the Old Lady, since Juve could get a discount for the Frenchman.

Tuttosport do their own maths, based on the fact that Transfermarkt value Ramsey at €40m, and Juventus would like to pay up to €80m for Pogba. So they hope that the difference of €40m could be the answer to this swap. 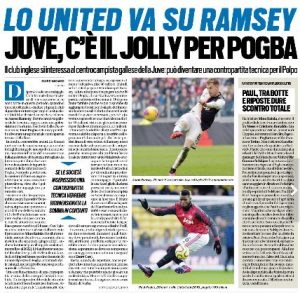 Tuttosport are still not completely convinced of Ramsey’s move, though. Because even though he’s still to impress for Juventus, there are still a few months in the season for him to be decisive and change the club’s plans.

There’s little doubt that the Old Lady want Pogba back, and that’s something that would weigh heavily for them to include the Welshman in the deal.