It’s been an interesting week to follow A Bola’s claims about the future of Bruno Fernandes. Especially for Manchester United fans who are hoping their club sign him in the summer.

Back on Wednesday, the Portuguese newspaper put Manchester City and PSG in the lead for the player, without giving the Red Devils a single mention.

Then on Thursday, the outlet came up with a headline saying ‘War in Manchester’, claiming that City and United were the clubs battling hard for the signing.

next, they bring a complete list of the clubs who have shown their interest in Fernandes. And this time, the Old Trafford side look like the strongest in the race. 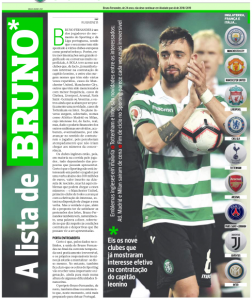 It’s not like A Bola are saying that Manchester United have advanced talks with Sporting or anything like that.

But it’s claimed that the Red Devils were the first to show their interest, and when talking about the player’s €100m release clause, they say Ole Gunnar Solskjaer’s side are prepared to pay that amount. The Old Trafford club are the only one to have a mention like that.

The other sides who are following Bruno Fernandes would be Manchester City, Liverpool, Chelsea, Tottenham Hotspur, Arsenal, PSG, Juventus and Inter Milan. A Bola says that Milan and Atletico Madrid were also interested, but left the chase due to the big auction that is about to come.