Earlier today, we covered an article in the Italian media regarding the Everton-AS Roma potential deal involving Bernard and Robin Olsen.

It came from Corriere dello Sport, who said the deal was still a possibility, but only if the Toffees made some compromise over the price of their Brazilian forward.

We’ve found two more reports since, and they paint an interesting picture, adding to Corriere’s claims, and we’ll start with Corriere della Sera’s.

They have a brief bit on the Bernard deal, explaining Everton are still asking for somewhere between €12-15m for the player, although they do add the very important information that including Olsen would lower said price.

Il Tempo also have some of their own information, and it’s quite juicy.

According to them, Paulo Fonseca’s preference to bolster the attack goes in this order: Bernard, Stephan El Shaarawy and FC Porto’s Ótavio.

It’s then stated the Portuguese manager has ‘telephoned’ the Everton man ‘following various talks with his agent in the past few days’. 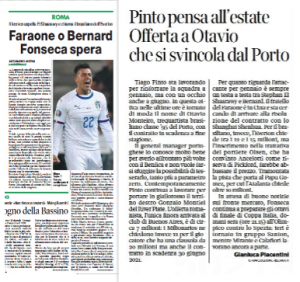 Despite this, unless Olsen is included, Bernard isn’t going anywhere as Marcel Brands and co. ‘aren’t doing any discounts’ and Roma ‘don’t seem ready to concretise an offer’.

Stephan El Shaarawy remains the ‘easier’ one to get to, but he’s still tied to Shanghai Shenhua for the time being, who aren’t willing to let him go for nothing.

All in all, it seems like it could all come down to whether or not the Italy international can free himself from his contract in China.