Manchester United succeeded in their efforts to bring in a new striker in January as the Red Devils took Odion Ighalo on loan from Shanghai Shenhua. Prior to his arrival, Ole Gunnar Solskjaer’s side were interested in Paris Saint-Germain’s Edinson Cavani.

Reports coming out of France in February suggested the Premier League is a ‘destination that appeals’ the 33-year-old, with United once again mentioned as one of the suitors for summer.

Atlético Madrid were also keen on signing the Uruguayan in January, but no deal materialised and the striker continued with the Ligue 1 winners.

Over the last few days, L’Equipe and Ovación explained Boca Juniors dream of signing Cavani, but his salary of €10m per season remains the main stumbling block. The PSG star doesn’t want to lower his wage demands because the attacker’s aware he could earn more elsewhere.

AS have relayed the aforementioned claims and then went on to provide their own information regarding this case.

The South American’s current deal with PSG runs down in the summer and the newspaper states Cavani has no plans of signing an extension. 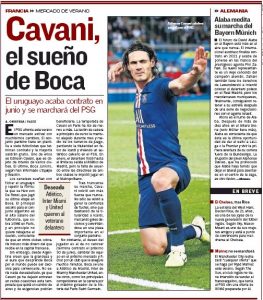 Apart from Boca Juniors, there are other clubs who ‘want’ the experienced player and Manchester United are included in the list.

It’s stated the Argentine side join Atlético, United and Inter Miami as the ‘main competitors’ in the race to sign Cavani on a free transfer.

All interested parties can commence talks now for a free transfer, given the player’s contract status.