Edinson Cavani is keen on a move to the Premier League, with Chelsea and Manchester United named as potential suitors.

The Uruguayan striker has found himself out of favour at Paris Saint Germain this season after the arrival of Mauro Icardi in the summer.

He was heavily linked with a move away in January as a result, with Atlético Madrid looking to secure his signature.

That never happened, but L’Equipe explain that although no agreement was reached between the La Liga side and Cavani, there were negotiations.

The newspaper says that with reports about a move swirling, PSG chief Leonardo phoned his counterpart Andrea Berta at Atlético to see if there was any truth to the rumours.

Leonardo followed this up by phoning Cavani’s half-brother and agent Walter Guglielmone and told him he didn’t want Cavani to leave.

That appeared to be the end of it but, then, on January 26th, Cavani’s entourage agreed the outlines of a deal with Atlético.

Guglielmone then meets with Leonardo and tells him Cavani wants the move to Atlético, despite there also being interest from Chelsea and Manchester United.

Ultimately the move to Spain doesn’t happen as Atlético didn’t have the money, leaving Cavani at PSG and looking ahead to the summer, when his contract expires. 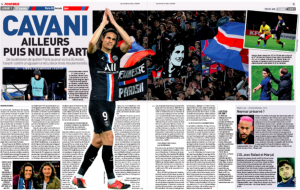 By that point, L’Equipe say water should have passed under the bridge, and the Atlético option will be there.

However, they may not be the only suitors as other clubs, namely Chelsea and Manchester United, ‘may have realised their interest’.

Should the latter do so, the Premier League is ‘a destination that appeals to the Uruguayan’, which should give both hope if they are genuinely keen.

At the moment it’s not made clear whether they genuinely are, although L’Equipe seem determined to ensure everyone knows that they are possible locations for the striker.