As has been hammered into our brains for the past week or so, Manchester United are reportedly interested in Victor Osimhen.

There is no denying the Red Devils, who are expected to lose Edinson Cavani at the end of the season, will need a new goalscorer in the summer to please Erik ten Hag and help out Cristiano Ronaldo, and the Nigerian appears to be on their list.

Previous reports suggested Manchester United had made a €100m+ offer for the player, but that doesn’t appear to have been accepted as of yet (otherwise a big deal would have been made of it).

La Repubblica, relayed by Area Napoli, this in their article about the future of Napoli players on Tuesday, explaining that Manchester United ‘have already come forward’ for the striker ‘with an offer of €100m’. 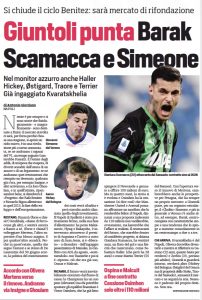 Corriere dello Sport, down their end, explain that Manchester United, as well as Arsenal, ‘may make a sacrifice (meaning a big bid) that would make him happy’.

Napoli, down their end, ‘would not falter’ if they were ‘faced with an indecent proposal worth €110m’, but would ‘let the deal happen’.

Something to think about, because it seems that Osimhen would be open to a move to Old Trafford if it presented itself, especially when you take into account claims that he has been a fan of the club since his childhood.