Portuguese newspaper Record today writes that Sporting’s squad will be in ‘reconstruction’ for the next season, as there should be several arrivals and departures in the summer window.

One of the cases to be defined is the one of goalkeeper João Virgínia, who has spent a year in Lisbon in a loan spell from Everton.

When agreeing the deal with the Toffees, the Lions were given a chance to buy the player this summer for a fee of €5m.

His season at Alvalade, however, wasn’t enough to convince Sporting of spending that much on a permanent deal, and that’s why they’re ‘interested in renewing the loan’. 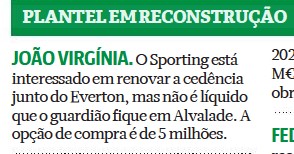 Record doesn’t know if that plan will work, claiming that despite the Lions’ interest in extending his spell, his stay at the club is not certain yet.

When leaving Everton last summer, Virgínia was looking for more minutes played, but he hasn’t really got a lot of it in Portugal, as he has made just seven appearances, with none of them being in the league.