Depending on who is reporting the story, Manchester City are once again interested in Napoli’s Kalidou Koulibaly.

We covered a number of articles on Thursday, and while Gazzetta dello Sport didn’t mention them in theirs, Le Parisien explained the player had a preference for Pep Guardiola’s side should he decided to leave the south of Italy.

This was backed up by an Italian journalist, who explained the defender had once told him he’d only leave Naples for four teams: Real Madrid, Barcelona, Paris Saint-Germain and Manchester City.

The Champions League ban, however, could change things, but that hasn’t stopped the Etihad residents from looking at the centre-back.

We don’t need to remind you of City’s struggles at the back this season following the injuries to Aymeric Laporte and John Stones, meaning an extra experienced body like the Senegal international would always be welcome.

Corriere dello Sport on Friday have an article on Koulibaly’s situation as things stand, and they make it very clear Napoli won’t accept anything less than €100m for the player. 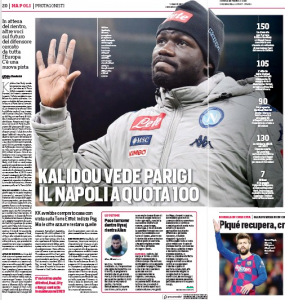 That’s down from their €130m request last year, but it’s not exactly an affordable fee, which limits the potential suitors.

The Italian newspaper report Manchester City, Barcelona, Real Madrid, Paris Saint-Germain and Manchester United are all still interested in the player, but it’s the latter two who ‘command the operations’ for the upcoming transfer window.

This suggests the Cityzens might need to step their game up if they want to get their man, but, if true, then they can rest on their laurels a bit more than the competition, knowing the defender has a preference for their club.