There was once a time when Kalidou Koulibaly was one of the most coveted defenders in the world.

All the big teams were after him, and it was reported in Italy that Manchester United had seen a €100m bid rejected by Aurelio de Laurentiis for the centre-back.

However, things have changed a bit since then, as the player has struggled with injuries, and teams like Manchester City, once often mentioned alongside the Red Devils, appear to have moved on.

That is now limiting his options, and while Gazzetta dello Sport believe Everton, Manchester United and Bayern Munich are still after him, that wasn’t his favoured option.

According to Le Parisien, Koulibaly ‘had a preference for Manchester City’, but the French newspaper explain ‘the Champions League ban could change things’, and ‘the list of pretenders (Bayern Munich and Manchester United) isn’t very long’. 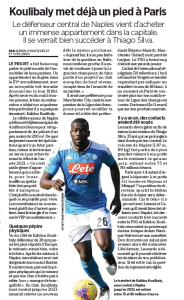 However, there might be the Paris Saint-Germain option, as they also report the defender has recently bought a €4m flat in the French capital, with a specialist in expensive properties claiming ‘it isn’t the type of flat that you buy to rent’.

As for a transfer in the summer, a person ‘close to the player’ to Le Parisien: “He’s done the tour of Italy. He wants to keep playing the Champions League, to be a part of  the project of a high level European club, seeing as how advanced in his career he is”.

The French newspaper state his value is currently between €75-80m, narrowing the list of clubs capable of buying him.

Manchester United, Manchester City and Paris Saint-Germain have all spent such amounts on players in the past, after all…