Lyon’s Tanguy Ndombele has been linked with several big clubs across Europe.

Last weekend, we carried a report from L’Equipe, who explained the France international is attracting interest from Manchester United and Juventus.

On April 29th, Tutto Mercato Web reported that Manchester City have an offer of €70m ready for the midfielder and are willing to hand him a five year deal to join them.

Lyon president Jean-Michel Aulas gave an interview to Tuttosport and during the course of the interview, the Ligue 1 outfit’s chief was asked if the Turin club are interested in the 22-year-old.

“Honestly, I’d like to see Ndombele at Juventus with Pjanic, a player we helped developed at Lyon to whom we’re still linked. We’ll see what happens.”

Earlier today, we covered claims from AS that Real Madrid are interested in Ndombele and Lyon value him aroud €100m. In the same report, it was also stressed a fee between €70-80m is sufficient for the Ligue 1 outfit to sanction their star player’s sale. 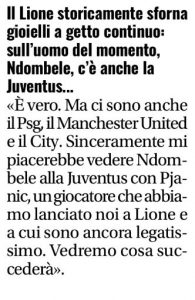 With interest from top clubs in England and mainland Europe, it should be seen as to where Ndombele will play next season.