Today’s edition of Spanish newspaper AS looks at Real Madrid’s interest in Tanguy Ndombele after Zinedine Zidane asked to initiate contacts with Lyon to find out if the transfer is possible in the summer.

This echoes what was reported last Friday when Foot Mercato in France explained that Real Madrid have held ‘very positive’ meeting with the player’s entourage.

However, the Spanish newspaper claim the former Ndombele’s agent reported his client’s priority was to play in the Premier League next season, where Manchester City and Tottenham Hotspur are ‘very interested’ in signing him.

With Zidane’s return to Santiago Bernabeu, it remains to be seen whether Real Madrid will be able to convince Ndombele to join them, as he might face more competition in that midfielder than, let’s say, at Tottenham.

The Frenchman has been one of the standout players for Lyon this season, and having made his debut for France in October 2018, the midfielder is drawing attention from top clubs across Europe. 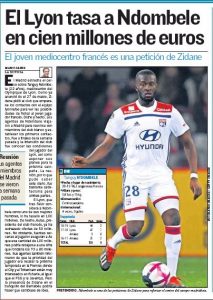 Knowing this, Lyon have slapped a €100m valuation for Ndombele, but the price tag could come down to €70-80m.

The problem for Tottenham here remains the price, as they have never paid such an amount for a player (their record spend is £36m for Davinson Sanchez).

Even if, after two barren transfer windows, we might see some extra spending from Daniel Levy in the summer, it still seems unlikely they’ll go as far as spending over £60m on one player.

Then again, we might also all be in for a surprise, and it will all come down to how much Mauricio Pochettino wants his man, and how convincing Spurs can be as if they end up going toe to toe with Real Madrid in this.

In September, L’Equipe claimed, ‘at the beginning of the summer’, Daniel Levy had ‘verbally expressed’ Tottenham’s willingness to pay €45m for the player.

After that a ‘mystery’ club put forward a €50m offer.

That wasn’t enough either.