The goalkeeper had a lot to say about the great couple of years he’s had at Anfield, first winning the Champions League, and now close to getting his first Premier League title.

But a big part of the interview was far more interesting, where Alisson talks about his religion and what he’s been learning from his teammates at the club.

The Brazilian was recently seen baptising Roberto Firmino, as well as the wife of Manchester United midfielder Fred. Reports from the English press even pointed out that the number of people baptised by Alisson is higher than the number of goals conceded by him this year.

When the reporter mentioned that Alisson is a religious man, he replied: “I’ll correct it a little. I’m not religious, I’m a follower of Christ. When we talk about religion, it’s very much tied to traditions and factors that somewhat tarnish the rich history of Christianity. Jesus is much more than religion.” 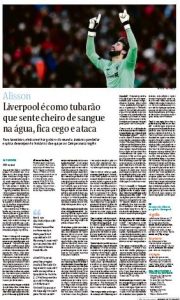 On the curiosity for each other’s religions in Liverpool’s squad, Alisson said: “We talk about it. When Firmino was baptised in water, everyone asked what it was, what it meant. I also like to understand how people of other religions think. It’s cool to get to know our teammates.

“I talk a lot to Salah, because I try to understand a different reality from that in Brazil. He also asks. Here in England there are a lot of Muslims, so I think the English know a lot more about Muslim culture than we do. It is a distant thing for us. What we saw was Jade’s soap opera,” says the goalkeeper, mentioning O Clone, which was a huge success in Brazil in 2001 and 2002.

On prejudice against evangelic players in Brazil, Alisson said: “Prejudice is everywhere. Prejudice exists from the moment you have difficulty assimilating a different opinion, be it religion, sexual option or anything else. Not agreeing doesn’t give me the right to be prejudiced. Our commandment as a Christian is to preach the word, but I don’t invade anyone’s privacy to do so. If the person doesn’t want to know, I won’t speak.”

Alisson was also quizzed about the polarisation in Brazilian politics. And he claims people should be more supportive of right-wing president Jair Bolsonaro.

“I believe that people preach a lot of freedom of speech, but they don’t know how to respect the opinion of others. We have lived years where the left-wing has economically sunk the country. They did good things, they mainly helped the poorest, but what was the goal? What they did badly was much more serious than the positive things. You don’t have to put it on a scale. He did something wrong, he stole, but he helped so-and-so, the poor. It’s not like this.

“I see people who didn’t vote for Bolsonaro hoping he does something wrong to be right. It’s not a question of being right. If he’s a good president, it will be good for everyone, even those who didn’t vote for him. I hope that the changes that have happened are for the good of Brazil and that I can continue my journey in the national team and bring joy to people through football, which has always been an escape for our country.”