Home Europe Liverpool interest ‘must translate into something serious’ for transfer to get off...
SHARE

The Saul saga continues to be covered by the Spanish media, with Liverpool, and Manchester United, mentioned by Sunday’s edition of AS.

Atletico Madrid drew this weekend with Numancia, as part of their preseason schedule, and the club’s fans showed affection to Saul before during and after the match.

Despite the strong connection, the midfielder has been itching for a move this summer, with his prominence under Diego Simeone having reduced over the past year or so.

There had been talk of a deal which would see Saul go to Barcelona and Antoine Griezmann return to Atletico Madrid, however that’s stalled somewhat over the past week.

That’s also the case with Liverpool and Manchester United, explains the newspaper, although when it comes to the Red Devils it often feels they’re just thrown into Saul stories out of 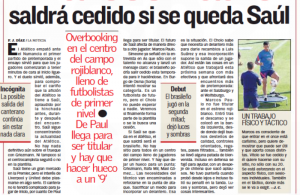 Liverpool interest ‘must translate into something serious’ for the transfer to happen, and that would lead Atletico to look at replacements.

Despite endless claims, it doesn’t feel like there’s an awful lot happening here.