If Adrien Silva’s father and agent is to be believed, we are going to be getting news regarding the Portuguese midfielder “soon”.

As of now, Leicester haven’t given the player and his entourage the green light to speak to clubs, but that doesn’t mean they can’t speak to the press about preferences should he leave King Power Stadium.

Following this weekend’s news that Bordeaux in France were interested in signing the 29-year-old old on loan, Sud-Ouest did a little more digging for their Monday newspaper.

The local French outlet explain everyone is still ‘waiting’ on Leicester’s and Claude Puel’s decision regarding the Portugal international, and confirm that no ‘direct contact’ has taken place between the Ligue 1 side and the player’s camp. 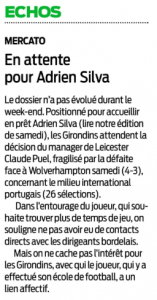 What they do report, however, is Silva’s entourage, and of course the midfielder himself, ‘aren’t hiding their interest’ in a move to the southwest of France.

This is because the Leicester player already knows the area and the club, having spent some time there as a youth prospect back in the early 2000s before moving to Sporting CP, where he stayed until his £22m exit in 2017.

Sud Ouest explain Silva has an ‘affectionate relationship’ with the French side, meaning nostalgia could play a part in his final decision should he be told he can leave the Premier League side this month.