Leicester City target Gonzalo Plata has spoken to his home country’s media about his chances of moving to the Premier League.

Interviewed by Fanático from Ecuador TV, the Sporting star has been asked about the chances of a transfer to England in the near future, and didn’t hide this ambition to do so.

“Yes,  I have heard the rumours, but I don’t know anything about it. It’s my businessman who moves the chips as he says. Since I was a child, the European league that I saw the most was the Premier League and it’s a dream for any player to go there.”

It’s Ecuagol who brings the quotes, and adds that both Leicester City and West Ham United are interested in his signing. Portuguese newspaper O Jogo does the same, but they only name the Foxes. 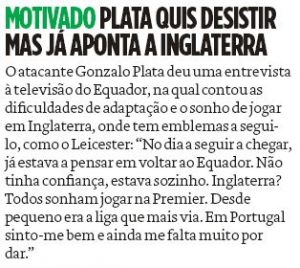 Plata has been linked to Brendan Rodgers’ side for a few months now, with the latest reports from England saying the Foxes could double their bid and put €30m on the table.

However, it’s been claimed in Portugal that Sporting only own 50% of the Ecuadorian star. The Lisbon side’s intention would be first to acquire 100% of his rights, then wait for him to develop a little, so they can make the maximum from a sale.