After Thursday’s comprehensive breakdown of the Chelsea-Antonio Conte-Maurizio Sarri situation by Il Mattino, Gazzetta dello Sport didn’t want to be outdone, deciding to give it a go themselves on Friday.

Much of it is the same, with financial problems at the centre of it all, and, as things stand, the Blues’ current manager will be there on Monday to oversee the beginning of the Premier League club’s preseason.

Relaying much of what the Times said on Thursday, Gazzetta do add a bit of their own information in there, explaining that, in theory, if Antonio Conte was sacked, Maurizio Sarri could force an exit.

Good news, right? Sadly not, because Napoli still own their former manager’s image rights, and should he be seen wearing any logo other than that of Aurelio de Laurentiis’ team, he would be heavily fined. 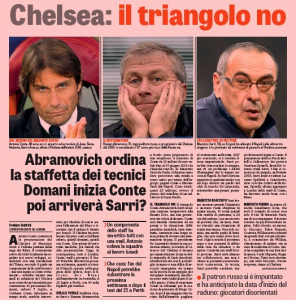 This means an amicable resolution is needed, with negotiations to regain full control of them.

Despite a gut feeling this could be nearing the end, one way or another, there’s bound to be more twists and turns in this saga.

We don’t know what’s coming next, but we certainly hope for the sanity of Chelsea fans that this is resolved sooner rather than later.

If it means another year of Conte, so be it, but it won’t be pretty.