Aaah, Maurizio Sarri to Chelsea. What will we do with you?

Perhaps one of the most complicated managerial sagas of all time, the former Napoli man’s situation still hasn’t been resolved, partly due to Antonio Conte, partly due to Aurelio de Laurentiis.

We won’t bore you with those details, as they’ve been well documented in the past, but Il Mattino on Thursday give us an update on Sarri, and it’s not looking great for the 59-year-old.

Told to wait by Marina Granovskaia, the manager is said to be ‘devouring dozens of cigarettes a day, making the good fortune of tobacco shops in the area’, as he tries to occupy himself in the meantime.

Down his end, everything is sorted with Chelsea: three year contract, which includes 100% of his image rights and a salary of €6m/year. 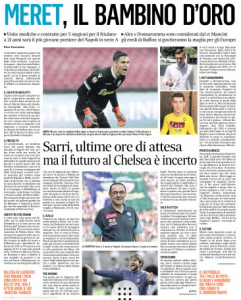 Over in England, the Blues’ preseason is about to start, with players not participating in the World Cup expected to undergo their medicals soon, and Chelsea still don’t know who their manager will be.

Il Mattino reveal a new meeting will take place on Thursday between the Premier League side and their manager to try and sort it out once and for all, but even if they do, Sarri still needs to be freed from his Napoli contract.

That has yet to be looked at properly by Chelsea, as the local newspaper explain no real ‘summit’ has taken place between Napoli and the Blues.

Should the whole ordeal collapse, Sarri will be ‘stuck’ with his Napoli contract for the foreseeable future, still getting paid but unable to do the job he loves.

If that were to happen, Il Mattino feel, down the line, De Laurentiis would allow him to go, having proven his point.

As for Chelsea, we just have to wait. A decision could be made in the next few days, maybe even on Thursday, but it’s hard to predict.

Something needs to happen, though, as the club cannot go on in this toxic limbo.