Earlier today, we carried a report from Mundo Deportivo who claimed Barcelona ‘know for sure’ about Everton’s interest in signing Yerry Mina in the summer transfer window.

Another report from the same newspaper now ‘admit’ the Merseyside club want to sign the Colombian international. The Catalan newspaper’s back page often has a column from Miguel Rico and over time it’s become apparent he has good links at Barcelona.

Whilst Barca admit the interest, Rico says the La Liga winners are in no rush to reject the Premier League club’s approach or sanction his sale.

Mina headed three goals for Colombia at the 2018 World Cup, where they were knocked out of the tournament by England and national hero Jordan Pickford. Ernesto Valverde’s side are aware the 23-year-old could attract more interest because of his displays in Russia.

Therefore, Mundo Deportivo claim Barcelona do not want to sanction Mina’s transfer right away and have adopted a ‘wait and see’ policy before taking a decision. The defender arrived at the Camp Nou from Brazilian club Palmeiras in January, but has struggled to impress in his first six months at Camp Nou. 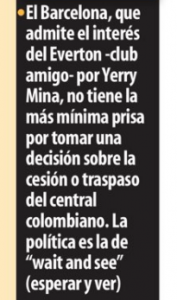 Barcelona may eventually decide to sell either Mina or Paulinho. This is because the Spanish champions have to make room for Brazilian midfielder Arthur.

La Liga rules allow every club to register no more than three non-EU players in the squad. At the Camp Nou, the quota is currently taken by Mina, Paulinho and Philippe Coutinho.