Home Europe Barcelona set to complete player’s transfer, will be presented to media on...
SHARE

Another day and another report from Mundo Deportivo talking about the development in Barcelona’s efforts to complete the signing of Gremio midfielder Arthur.

The two clubs already reached an agreement for the 21-year-old earlier in March. The La Liga winners had the option of bringing the player to Camp Nou either this summer or in January 2019.

Andrés Iniesta’s exit coupled with Carles Aleñá’s long-term injury forced Ernesto Valverde’s side decide to sign Arthur this summer. On Thursday, we carried a report saying the Brazilian and his agent, Jorge Machado were waiting for a call from the Catalan club to make a trip to Spain.

Today’s edition of Mundo Deportivo claims the midfielder will arrive in Barcelona on Sunday. Arthur is living his final few hours as Gremio player as he is expected to take his flight to Europe on Saturday.

Barcelona agreed to pay €30m plus €9m in variables to Gremio, if they ta 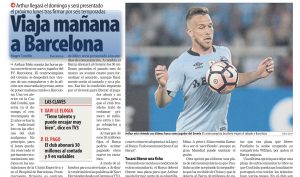 ke up the option of signing him this summer. Barcelona will have to pay the fee in one go and not in installments. This was the South American club’s condition to allow their star player to leave.

Mundo Deportivo claims Arthur will undergo his medical on Monday and sign a six-year deal with the Spanish champions on the same day. He will also be presented to the media on Monday.