André Gomes, Rafinha Alcántara, Aleix Vidal, Paco Alcácer and Marlon are the players that Barcelona are looking to offload this summer.

Mundo Deportivo claims despite the Catalan club’s decision to allow the above mentioned players to leave, two others, Yerry Mina and Paulinho have received more proposals than the rest.

The 23-year-old defender was one of the standout players for Colombia at the 2018 World Cup. Knocked out by England, Mina has returned to his country as a national hero.

Barcelona are now ready to allow Mina leave the club, provided they receive a significant amount. Mina is attracting interest from England and Turkey and the La Liga winners already ‘know for sure’ that Everton are interested in the defender and have ‘moved around’ the player with initial work on a transfer.

Mundo Deportivo says Ernesto Valverde’s side are not aware of interest from Liverpool, despite claims linking them. The message is clear: Everton interest is real, perhaps Liverpool interest isn’t.

They also claim Fenerbahçe asked about the Colombia international even before he went to Russia for the World Cup. There have been claims the Turkish club will offer €30m+ but that just seems completely unrealistic, and it’s stated Mina doesn’t want to go there anyway. 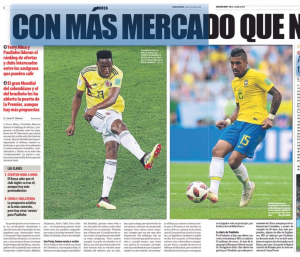 A section at the Camp Nou want Barcelona to allow Mina go out on loan. If they decide to sell him, then they want the club to include a buy back option, in case the player goes on to become a top talent at another European club.