While Liverpool’s Champions League victory last season was impressive in its entirety, few will disagree the comeback against Barcelona was the defining moment on their road to success.

Losing 3-0 at the Nou Camp, Jürgen Klopp’s men knew they needed the Anfield crowd at their best to draw inspiration from to turn things around, and that’s exactly what happened, as they dismantled the La Liga champions 4-0.

This defeat left a mark on the Barcelona team, as players like Luis Suárez admitted to being heavily affected by it, and now it’s Clément Lenglet’s turn to talk about it in an interview with Onze Mondial.

The centre-back said: “It was incredibly difficult to digest, that defeat. It’s definitely the worst loss of my short career. It’s hard to explain, it hurts a lot. In general, I watch my games back, but that one, I don’t really want to see it again because it was really a big hit in the head.

“But it’s in the past now. You have to start again. Sadly, that defeat will be in our career history. We now need write something beautiful to erase that from people’s minds”. 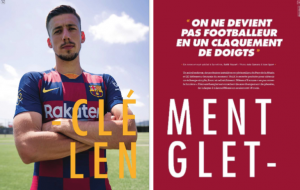 The centre-back played every single game of Barcelona’s Champions League campaign last year, and appears to have established himself as a regular starter under Ernesto Valverde, overtaking Samuel Umtiti in the pecking order.

He arrived from Sevilla last summer for £32m after just a year with the Spanish side, who made a £27-28m profit on him after spending less than £5m in 2017.