Despite Antonio Conte repeating multiple times that he is happy at Chelsea and he will be here next year, rumours in Italy regarding him potentially leaving have circulated over the pat few weeks.

Comfortably on course to bring back the Premier League to Stamford Bridge in his first season in charge of the club, the Italian manager has been claimed as being rather unhappy with the lack of backing he got from Roman Abramovich in January, as Corriere della Sera spoke of ‘broken promises’ and ‘betrayal’ just a few weeks ago.

Conte was said to want a stronger team by the end of the season, something he did not get, and will now have to focus all of his efforts on adding depth to his squad for next season, as Chelsea will be returning to the Champions League.

While many scoffed at the idea of the relationship between Abramovich and Conte being tense, former Torino and Udinese manager Gianni de Biasi told Gazzetta dello Sport on Thursday that a lack of communication existed between the club’s owner and Chelsea’s manager. 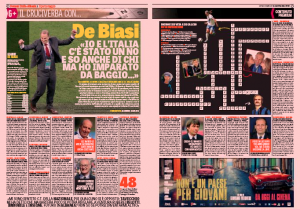 Speaking of the rumours linking Inter Milan with a move for the Blues’ main man, the current Albania national team manager said: “It seems strange there being talk about Conte: in December I was with him in Cobham, and he has still much to do there, although it is true that he is lacking a more direct relationship with Abramovich”.

Considering the Italian manager walked out at Juventus due to a lack of spending by the board, if the Russian oligarch wants to keep his new protégé happy, he will need to open the chequebook.

And perhaps talk to him face to face a little, too.