Yesterday, we covered a bit of information in Il Messaggero that Roma were considering making Antonio Conte an offer in the summer if Luciano Spalletti didn’t renew his contract.

Our general feeling regarding that story was Chelsea’s current success would see the Italian manager stay beyond the season, and unless something went very wrong at Stamford Bridge, fans shouldn’t have too much to worry about.

However, Corriere della Sera on Wednesday seem to think there might be some cause for concern, especially as Roman Abramovic has ‘already betrayed’ his manager once this season. 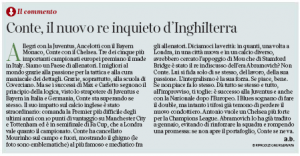 With Champions League football right around the corner at Stamford Bridge, Antonio Conte ‘wants a stronger team’ for the elite European competition, which means buying players.

The former Juventus man wanted some reinforcements in January to help him end the season without too much hassle, but the Russian owner’s reluctance to spend money midway through the campaign is being described as ‘breaking a promise’.

The bottom line of the article is: “If you do not open your wallet, Conte leaves”, and that could very well be the case.

Yet, we find it very hard to believe Roman Abramovich won’t strive to please his new favourite manager in the summer, with the Premier League title increasingly likely to return to West London, and we fully expect money to be spent to make Chelsea competitive on all fronts next season.

The Italian newspapers seem very keen to see Conte return to Italy next season, with Gazzetta reporting a few weeks ago that Inter had considered him too, and it appears we could be in with a few more of these over the coming months.

A new Chelsea contract should calm things down, and we would be surprised if one wasn’t already being worked on behind the scenes at Stamford Bridge for this very reason: Conte should be, and very likely will be, Roman Abramovich’s man for the foreseeable future.