Leeds United chief Andrea Radrizzani has revealed Marcelo Bielsa’s future will be announced at the end of the season.

Bielsa is out of contract in the summer, and that has naturally raised questions about his future, with some concerned that the enigmatic coach may decide to pack up his bags and head elsewhere.

That seems unlikely at the moment given the success Leeds are enjoying, while history dictates that Bielsa will simply deal with his contract at the end of the season, having done similar last year when his deal needed extending.

And Radrizzani has provided a positive outlook on things, saying the issue will be dealt with once the campaign is done and dusted.

“He will announce at the end of the season, but the will to continue together is there on both sides,” he told La Repubblica.

One of the key aspects of a new deal will be ensuring that Bielsa is paid adequately for the job he is doing at Leeds.

Having returned them to the Premier League, they have been excellent in the top flight this season, at no point being bothered by the relegation battle. 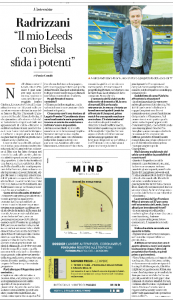 Indeed, their sights are firmly set on the top ten and will be looking that way again next season, with many believing that Bielsa can lead them back towards the top of the table.

That would be an achievement deserving of excellent remuneration, although, according to Radrizzani, he is already paid handsomely.

“He’s also very good at getting paid, eh!” he added.

“His salary is the third or fourth in the Premier League, but he deserves all that money because of the way he transforms the culture of a club and increases its value.”