Since Javi Gracia took over at Watford it doesn’t seem like he’s stopped speaking to the Spanish media. Every day or so there comes a new interview with the club’s manager and they all seem to follow the same template.

The Spanish newspaper will ask more questions about Chelsea than Watford, after Gracia’s men beat Barcelona’s Champions League opponents, and manage to get something in about Elton John.

Sport have not let the side down.

In their Wednesday edition, there’s a Gracia interview and the Watford manager is presented as the man who knows how to beat Chelsea.

Asked why he chose Watford, Gracia explained: “The competition in which we are, to be part of a club at this level, with a good organisation, very familiar, but also with resources so that nothing is missing. We are well taken care of, with a sports city with 5 pitches to train, we are comfortable.”

On his aims at Watford, the manager explained: “It’s a club that has been two years in the first division, many years in the second, and we want to be as high as possible, aware that there are six teams at another level and the rest we have no insurmountable differences with.”

Gracia said this season the aim is to secure themselves in the Premier League and move as far away from relegation as they can. He didn’t mention a goal for the next campaign, but given he’s clearly been told there’s only six untouchable teams, the Pozzo family are probably looking for seventh.

There then followed no less than seven questions about Chelsea.

On whether Barcelona are favourites, Gracia gave the only answer a Catalan newspaper would expect: “I always see Barcelona as one of the favourites, in any competition they play. They have lost only one cup match and in the Super Cup. They haven’t been drawing lately, they’re favourite against Chelsea or against anyone.” 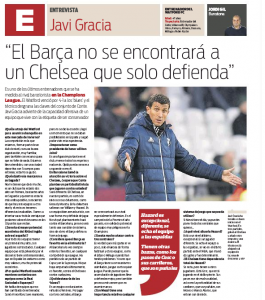 Chelsea’s dependence on Eden Hazard “shows” according to the Watford manager, but he also picked out Cesc Fabregas for special praise.

And to the compulsory question about Elton John, Gracia said: “He is an important figure in the club, he deserves all the respect and nothing else. I wish I could meet a great man like him.”

Come on Elton, pop around for dinner with Javi, if only so he’s got a more detailed answer for the Spanish newspapers.