Juan Hernandez is probably one of the most highly rated, and most valuable, Watford players, but he hasn’t actually played for the club.

Cucho, as he’s widely known in Spain, is an 18 year old winger on loan at SD Huesca from Watford, and he’s ben doing very well indeed.

11 goals in 21 games this season, coming from wide and central positions, has aroused the interest of Barcelona, report Mundo Deportivo.

So impressed are Barcelona that they even considered signing Cucho during the January transfer window.

The Pozzo family were asked a sale price and told Barcelona it would be €25m for the Watford registered player. That was too much for the La Liga leaders ‘for the moment’. 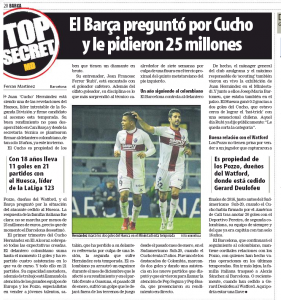 Great clubs from around Europe are also keen on the youngster, but Mundo Deportivo insist the Pozzo family aren’t ready to sell just yet.

When that time does come, the Catalan newspaper believes Barcelona holds some advantage.

The club are said to have a good relationship with the Pozzo family, running from Alexis Sanchez’s move from Udinese to Gerard Deulofeu’s loan to Watford during the last window.

Watford loanee ‘not at best level’, described as ‘notably overweight’.