Home Europe From Germany: BVB player ‘makes no secret’ that Manchester United is his...
SHARE

This week’s edition of SportBild has a feature on the future of Borussia Dortmund, and Manchester United get a mention.

It would be suspected it would be among the paragraphs on Jadon Sancho, but it’s not. Whilst the German media would like to get involved in that story, they know no more on Manchester United interest than what is being reported in the English media.

The player who gets the reference to the Premier League club is Manuel Akanji.

A 23 year old central defender, Akanji has 22 appearances so far this season for BVB. He’s already a regular Switzerland international, and even represented his country at last year’s World Cup.

And, according to SportBild, he rather likes Manchester United.

The magazine says Akanji ‘makes no secret’ that his ‘dream club’ is Ole Gunnar Solskjaer’s side.

There’s no explanation of interest from Manchester United, SportBild just place the reference there, and then point out the player has a contract lasting until June 2022. 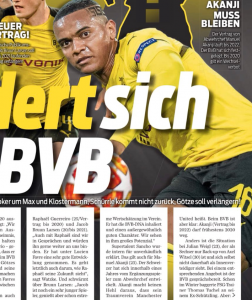 The claims likely date back to quotes from Akanji in October 2018, when he said: “Many know that Manchester United has been my favourite club since childhood. It would be nice to play there, but that’s not an issue right now.”

Do the Red Devils even care? Time will tell.