In June, Catalan newspaper Mundo Deportivo published an article outlining what should be Barcelona’s negotiating tactics to get Hector Bellerin from Arsenal.

It was fun stuff with Mundo Deportivo explaining a first offer of €25m would be the way to go about things, because going in with €40m would only make Arsenal feel they could get a higher end fee.

Sport are almost as funny in their Thursday newspaper, saying Barcelona are considering making a first proposal of €30m, and dangling the ‘variables’ carrot in front of Arsenal. 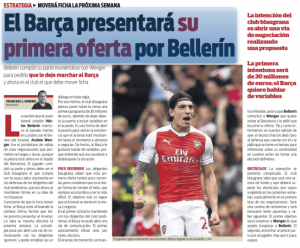 It will be an ‘endurance race’ to sign Bellerin from Arsenal, believe Sport, and so the Spanish club need to plan well and hold their nerve.

But, assuming there’s even the slightest chance of Arsenal selling this summer, that could be snuffed out should Barcelona go in with a farcical fee and feel adding bonuses will make it all better for Arsenal.