Leicester City’s Nampalys Mendy really fancies moving to Bordeaux for the next season, after a difficult period since moving to the Premier League.

Mendy hasn’t tried to keep his Bordeaux desire a secret, happy to tell the entire world that he’s got his mind set on a move to the Girondins.

Around a week ago, Mendy was quoted as saying: “Since my agent told me about the possibility to join Bordeaux, I’ve been fixated on that. If I return to France, it’ll be Bordeaux or nothing. I’m now hoping to join Les Girondins quickly. It’s even an obsession.”

That sent a very clear message to other clubs interested in the midfielder, they would probably be up against the odds. However, since then there’s been no advance on the 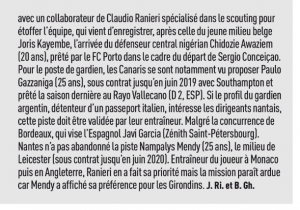 situation, Bordeaux haven’t agreed a deal with Leicester City and Mendy remains with the Foxes, presumably having to manage his obsession.

French newspaper L’Equipe say Nantes trying to sign the player is ‘not abandoned’, and it could be a fresh track if Bordeaux and Leicester can’t agree. Nantes are currently managed by Claudio Ranieri.