Home Europe Newcastle United set for one transfer tussle with Monaco, another with Rennes
SHARE

Towards the end of June we covered a small claim from L’Equipe that Newcastle United have interest in Adama Diakhaby. The French newspaper stated that Newcastle ‘could’ make an offer for the Rennes player in the ‘coming days’.

That was on June 26th, either no offer has arrived yet or both clubs have managed to keep it from the media. Thursday’s edition of L’Equipe once again credits Newcastle with interest in Diakhaby, but also brings AS Monaco into the equation.

There’s already been talks between Rennes and Monaco, and Diakhaby wants to join the French principality club, which is no surprise really, and perhaps Newcastle have missed their chance with the 21 year old attacker. 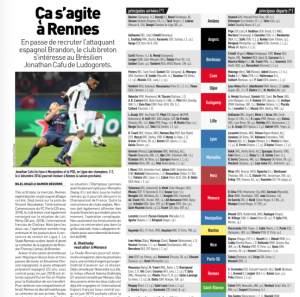 L’Equipe say Rennes are interested in Jonathan Cafu, another player catching the eye of Newcastle United.

Earlier this week Sport Witness learned that Newcastle have joined the list of clubs interested in Cafu, a 25 year year old Brazilian playing for Ludogorets.

The Brazilian would cost Rennes €8m, believe L’Equipe, but Sport Witness have been informed Ludogorets are still looking for €12m.