As Yacine Brahimi’s contract situation with Porto seems to be bothering the Portuguese club, it looks like Everton are one of the sides who could sign him in the January market.

It’s newspaper Correio da Manhã who brings this story today, claiming that the winger is ‘shaking’ things at the club as no one knows what will happen to him next month.

Brahimi’s contract expires in June, which makes him available to sign a pre-contract with a new club in the January market. 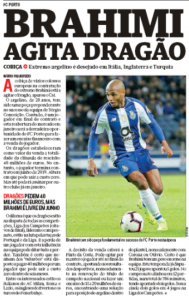 That’s why president Pinto da Costa is not selling Brahimi for less than €40m, which is his release clause, for now. And the interested clubs, which are said to be Milan, Roma, Everton and Fenerbahce, don’t want to spend that much on a player who will soon be a free agent.

In case Porto decide to make him available, then they will have to do it for €15m or €20m. That’s how the interested sides would come, but the Dragons must first think if it’s worth selling a guy who has five goals and five assists this season.