Leeds United and Leicester City are the two sides looking at the option of signing the 29-year-old and it was earlier reported by AS that the these two clubs will make a bid for the winger in the winter market.

It is further claimed in today’s edition of Catalan newspaper Mundo Deportivo that the Leeds and Leicester, along with Athletic Club Bilbao are interested in securing his services once the transfer window reopens next week.

Surrounding the player’s future, several ‘scenarios arise’ because the Spaniard will have six months left on his contract at the start of next month.

The La Liga outfit have already offered him a new deal, but the two parties are nowhere close to agreeing terms to extend the contract.

Gomez has a €10m release clause in his contract and his employers are in a ‘dilemma’ whether to keep him until the end of the season and let him go for free or earn funds from his sale midway through the season for a lesser fee. 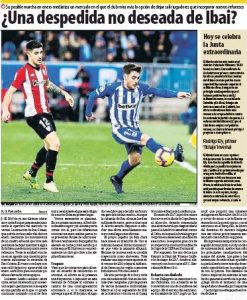 The wideman has made it clear that he will give his best to the club until the last moment with them. but he’s not been in his best form in recent weeks.

It will be interested to see how things progress from here onwards and whether Alaves will be able to find a solution to their dilemma regarding Gomez.

Leeds tried to sign the player in the summer, so their interest is clearly serious.