Everton scouts watched Benfica’s 4-2 win over Rio Ave for the Portuguese League this weekend, according to the local press.

It’s newspaper Record who reports the Toffees’ visit to the Estádio da Luz today, although they don’t seem to know who the emissaries had an eye on.

With a game full of goals, there were several players who stood out. But it was really Haris Seferovic who had a great night. The striker scored the first goal, made an assist for the second, started the play for the third, and scored the fourth.

Quite a big night for him, just like to João Félix, who’s just 19 and was also able to have a good performance once again, but had to leave the game due to a knee injury. 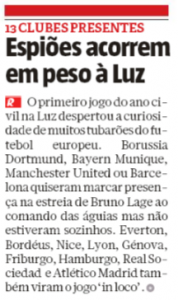 The only Benfica player who has recently been linked to Everton is Andrija Zivkovic. The Serbian international started the match against Rio Ave on the bench, but as soon as he got on, he was able to make an assist for the Eagles’ third goal.

Along with the Toffees, there were scouts from Borussia Dortmund, Bayern Munich, Manchester United, Bordeaux, Nice, Lyon, Genoa, Freiburg, Hamburg, Real Sociedad and Atletico Madrid at the match.