In case you weren’t aware from back when José Mourinho was their manager, Manchester United are in need of a centre-back.

Phil Jones’ last performance against Newcastle was a strong reminder that beyond Eric Bailly, Victor Lindelof and Chris Smalling, the quality in depth isn’t up to the Red Devils’ standard.

That’s why big moves for players such as Milan Skriniar and Kalidou Koulibaly have been touted, and the latter of the pair appears to be the number one target.

This is what France Football claim in their weekly magazine, stating Manchester United ‘dream’ of bringing the Senegal international to Old Trafford. 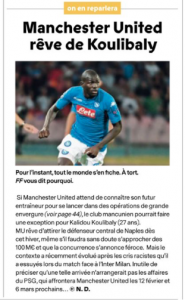 While the January window was meant to be a quiet one, since there’s no guarantees Ole Gunnar Solskjaer will be the full-time manager going forward, those in charge at the club could ‘make an exception’ for Koulibaly, whom they want to bring in this window.

France Football point out they are bound to face ‘ferocious’ competition, and that’s on top of Aurelio de Laurentiis being one of the more stubborn club owners around when it comes to player sales.

However, the magazine also explain the ‘situation has evolved’ recently after Koulibaly was the victim of racist abuse during a game against Inter.

And what does the player have to do with France? Well, he was born in Saint-Dié-des-Vosges and represented the French U20 team before opting for Senegal.