Home Europe Everton offer said to be less than half of what has been...
SHARE

Sport now claims the Spanish champions remain hopeful the left-back will not travel to the United States on Tuesday. For this to happen, Barcelona need to reach an agreement with the Merseyside club for the 25-year-old.

Barcelona’s valuation of the player is €16m. Despite the Mirror claiming the Toffees have made a €25m bid, the Catalan newspaper claims the two clubs are ‘far away’ from reaching an agreement for Digne.

Sport suggests Everton have made an offer of €10m for the Frenchman, which is €6 million short of Barcelona’s asking price. It’s also less than half of the claims from England. 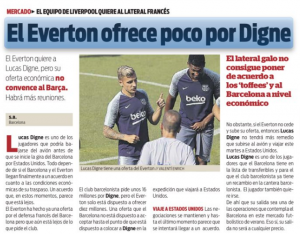 Digne wants to leave the Camp Nou and is on the list of players the club wants to offload this summer. However, Barcelona are unwilling to allow the France international to leave if Marco Silva’s side are not ready to meet the price tag.

Barcelona will have no choice but to include Digne in the preseason squad if no deal has been agreed before Tuesday.